When a a Norse child had reached 16 winters they were seen as full functioning adults. Females became adults at a young age, 12 years old, and were allowed to seek marriage. Strange enough Kittens from the spouse were given to the females as a show of love an association to Freya. By around 20 years of age was when are were deemed to have been wed. Since most men went hunting the  women had a large power of what happens at home since they take over jobs such as family, preparing food, laundry, milking cows, sheep and goats, making butter and cheeses, preserving food for winter, gardening, cleaning and the most time-consuming task of all, making the family’s clothes. Women were valuable members of the society and it was shameful for a man to harm a woman. That and women were seen as independent and a powerful like wolves in there own right. Starting a fight with one is like starting a problems with a pack of wolves that back each other similar to this IMPOSING WOLVES BANGLE- STAINLESS STEEL VARIETY . 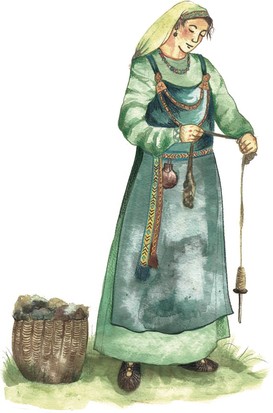 Viking Males who have become 16 years old on the other hand must have proved they knew how run their family farm, hunt, fish, fight and even more important was marry to prove they earned their way to being an adult. After meeting these requirements he would learn advanced version of all these activities as soon as possible since most Vikings were considered to have a long life making it to 40 years old. The longer stretch goal here was having a child, and starting a family of their own. Although fighting was encouraged among their own kind death dude to negligence or without a trial was not. Death pay was something that the Vikings resorted to in to combat this by having differing outcomes ranging from trial by fire , paying a fine or even banishment or death. Makes no wonder why so many connected anything black with death like this SLAIN RING- BLACK BRUSHED TUNGSTEN .

They had many trials but one major one was mutilation. An eye for an eye of sorts as a warning to others. This was done to demotivate others from repeating this mistake but they did have one other way short of death to show permanent standing on an issue. Slavery with ones life. 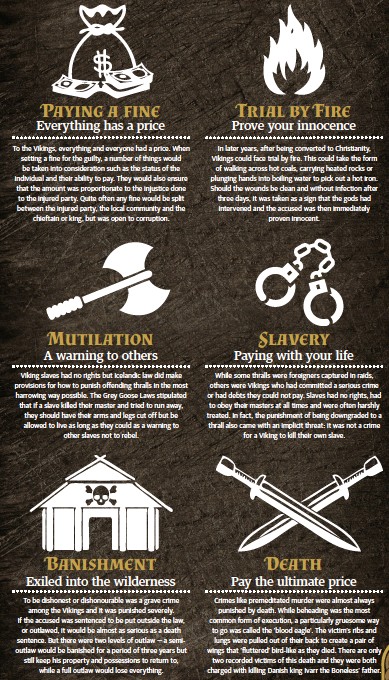 Slaves had no rights, were mostly outsiders but tribesmen who strayed too far outside the rules that don't land on death or trial by fire can end up living their mistake out for the rest of their life in service to the pers the punishment of being downgraded to a thrall also came with an implicit threat: it was not a crime for a Viking to kill their own slave. Death Pay the ultimate price Crimes like premeditated murder were almost always punished by death. While beheading was the most common form of execution, a particularly gruesome way to go was called the ‘blood eagle’. The victim’s ribs and lungs were pulled out of their back to create a pair of wings that ‘fluttered’ bird-like as they died. There are only two recorded victims of this death and they were both charged with killing Danish king Ivarr the Boneless’ father. on or next of kin that was wronged. If only they had HUGINN AND MUNINN RAVENS OF ODIN PENDANT- STAINLESS STEEL to help with foresight before they made such mistakes.

Barring all this to becoming a true Viking Male the important aspect that had to be learned through doing was to hunt wild beasts and put all prior knowledge to the test and succeed or perish...